The American Society of Mechanical Engineers (ASME) developed standards in the 1990s to govern passive hydromechanical grease interceptors. The standard was developed in collaboration with the Plumbing & Drainage Institute, and is referenced by the Uniform Plumbing Code, the International Plumbing Code and the National Standard Plumbing Code.

The standard — ASME A112.14.3 — is the measure by which passive grease interceptors (including many of Thermaco’s products) are measured. If it meets the standard, then the interceptor can be used in many installations. If it doesn’t, then it’s a non-starter.

So how, exactly, does one test a grease interceptor to see if it meets the ASME standard? When Thermaco was in the final stages of developing its high-capacity TZ-1826 grease interceptor, we used the test ourselves to understand the performance capacity the new interceptor was capable of. 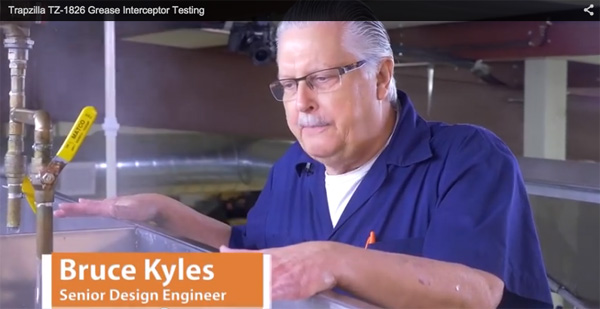 Interceptors are tested based on a per minute flow rate, measuring how much grease they can remove from effluent flowing that fast. It’s actually far beyond what any grease trap would ever experience in a commercial kitchen, but it’s what the standard demands.

Here’s how the testing was performed for the TZ-1826:

Step 2: Twenty pounds of grease – in our case, solid cooking lard that comes packaged in large blocks, wrapped in blue plastic – is heated to the same temperature, changing it into a viscous oil.

Step 3: The liquid lard is now mixed into the hot water, with 20 pounds going into one 100 gallon sink.  The sink receiving the lard alternates each testing cycle.

Step 5: The water that comes out of the grease interceptor is collected in a skim tank — basically another large sink. Any lard that remains in the water floats to the surface and is skimmed off with a metal blade and shallow pan.

Step 7: By subtracting how much lard came out of the skim tank from the amount that was poured into the interceptor to begin with, the total amount of grease that was retained in the interceptor can be calculated.

Step 8: To meet the ASME standard, 90 percent of the grease that enters the interceptor must be retained by it.  Also, the amount of grease retained (in pounds) must be at least two times the flow rating (in gallons per minute).  In the case of the TZ-1826, the minimum acceptable grease retention is 200 pounds (2 times 100 gallons per minute).

For the TZ-1826, we ran 94 such testing cycles over the course of more than 40 hours, pushing 18,800 gallons of water and 1,880 pounds of lard through the interceptor.  And the unit averaged a separation efficiency of 99.3% for the test.

Though this testing procedure is relatively straightforward, if labor intensive, we don’t recommend doing it during the middle of a snowstorm. If you want to see what happens when you do, though, go ahead and watch our mini-documentary testing video.