Restaurants and commercial kitchens around the world can easily open in non-traditional sites by using Big Dipper automatic grease traps. These products fit right in the kitchen and have Advanced Odor Protection to eliminate any odors expected with a grease interceptor. No longer have to worry about scheduling a pump truck to service your grease interceptor since the Big Dipper automatic grease traps remove grease from their tank into a separate grease collector than can be maintained in less than 2 minutes.

MLS EARTHQUAKES OPEN A STADIUM FOCUSED ON ITS FANS

Problem: MLS Earthquakes' were building a new stadium, Avaya Stadium. The plan was to feature numerous concession stands with kitchens scattered around the stadium. These concession stands were to sell fan favorites such as pizza, hotdogs, hamburgers, etc. These fan favorites were also high grease producing foods. The engineering team was unsure on how to best accomidate the grease interceptor(s) so ensure the plumbing and sewage system was properly protected.

Solution: The engineering team heard about Big Dipper Automatic Grease Traps. With the variety of sizes and ability to install in the most space-constrained locations, it was determined these could be the perfect solution. Big Dipper is simple to service and maintain. The staff remove the grease collector, empty it into a rendering barrel, and put it back on - eliminating the need for pump trucks. This was ideal given the complexity of the kitchen arrangement at Avaya Stadium.

Result: Since the stadium was opened, there have been on complaints about the Big Dipper unit. Avaya Stadium can focus on delivering great concessions to its fans. 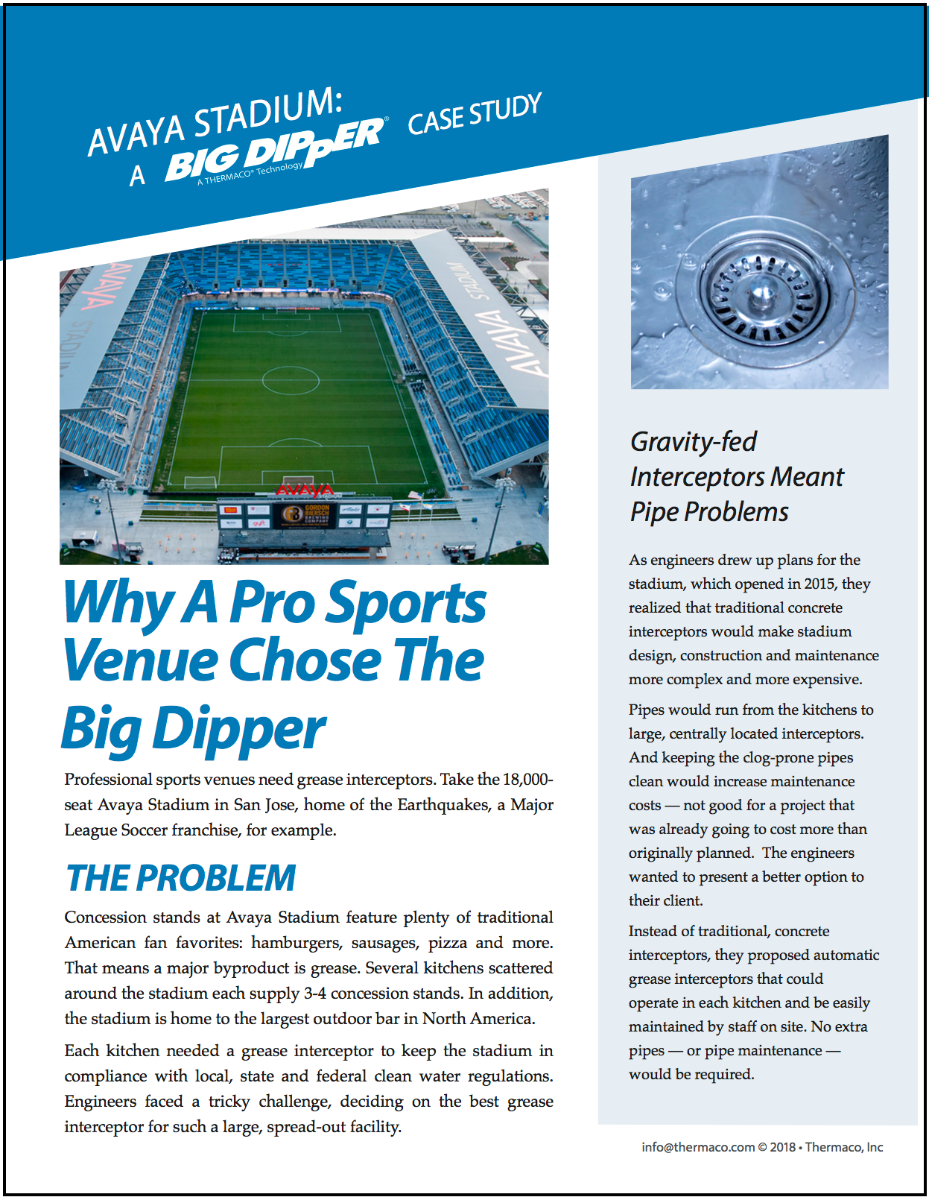 HOW A NON-PROFIT STAYS FOCUSED ON THEIR MISSION

Problem: “You could tell when they were cleaning the grease trap because of the smell,” Tammy Johnson, Life’s Kitchen Executive Director said. “It was pretty horrible.” Life's Kitchen is a culinary training program focused on at-risk youth to gain the confidence and competencies needed to rebuild their lives. One of the most dreaded chores was cleaning out the grease trap.

Solution: Thermaco heard about this problem and donated a Big Dipper Automatic Grease Trap to support the program. The Big Dipper has an automatic skimming wheel that removes the grease from the tank and stores it in a separate grease collector. Empthing the grease collector eliminates the need to scoop the grease out of the tank. It also has Advanced Odor Protection so you can't smell anything inside of it.

Result: Life's Kitchen can focus on preparing the at-risk youth with skills and experience that will provide employment and stability.